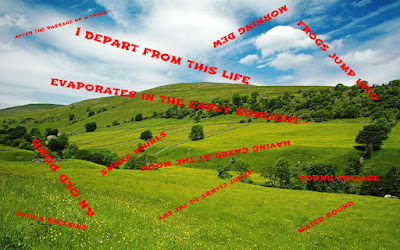 Recently, last month actual, I gave you something to "wrestle" with a new CDHK challenge ... the Haiku Puzzler. In that Haiku Puzzler you had to retrieve four (4) haiku from an image (see above) in which I had scrambled the lines of these four haiku.
To give you a "hint" I gave you a few ideas through some questions.

Here is the solution of this Haiku Puzzler:

1. This haiku poet brought haiku into the 20th century by mentioning a modern invention:

smoke swirls
after the passage of a train –
young foliage


2. This haiku is renown all over the globe:

3. At the end of the life of a haiku poet the custom was to write a Jisei (death-poem). This is the jisei of a famous female poet:

And the last haiku was a haiku written by myself:


To return to Carpe Diem Haiku Kai you can click.HERE

Ah! I got the second one, rest rest was a soup.