The Path Of The Honeysuckle, #3 Silvery Waves 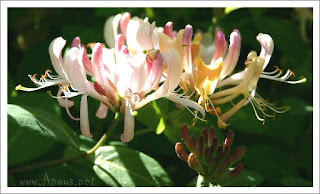 For this episode I have written a few new haiku which I am going to explore. Let's go on The Path Of The Honeysuckle and look for a (possible) deeper meaning.

fortuneteller touches
the heart of Honeysuckle
the path to wisdom

Do these have a deeper, spiritual, meaning? Let us follow The Path Of The Honeysuckle and look closer, closer to these two, in my opinion, wonderfully composed haiku (how immodest ... and that for a haiku poet). 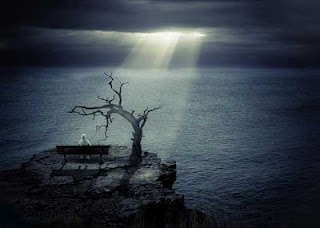 The first haiku to explore and encounter The Path Of The Honeysuckle:

In my country we have a natural phenomenon that we call (in Dutch) 'het lichten der zee' or in English 'phosphoresce sea'. When this occurs, mostly with full moon, the sea looks like silver and the waves have a silvery glow. It's a wonderful sight. This phenomenon occurs because little algae called dinoflagelate are reflecting the light of the moon.
I have seen this often and I remember that it was a magnificent and mysterious sight almost hypnotizing. I sat down on the beach and started meditating. The waves rolling to and fro the beach gave a deep, spiritual, feeling. When my meditation became deeper I realized that the silvery waves resonated with my heartbeat in the same way. It felt great and there on that beach meditating and hypnotized by the silvery waves in the bright moonlight I became all in one with nature. I felt great and was in a deeper, spiritual, mood than I ever had been. Embraced by the Universe laying down in the arms of Mother Earth. I felt save and happy sitting there with only the moon, the silvery waves, the sound of the sea and my heartbeat.
The deeper, spiritual, meaning in this one is very clear I think. Live with nature, be one with nature.
I have found a video on You Tube about this phenomenon. Enjoy watching it.

Come on ... let us go further on The Path Of The Honeysuckle and look closer at the second haiku.

fortuneteller touches
the heart of  Honeysuckle
the path of wisdom

I live close to nature, I feel myself a Wiccan and I love to look at the Tarot cards. I divine with cards and I have used the ancient Celtic Ogham or Tree cards to look into the future. The cards gave me a glimpse of the near future and I am glad to have seen my Path of Life in the cards. 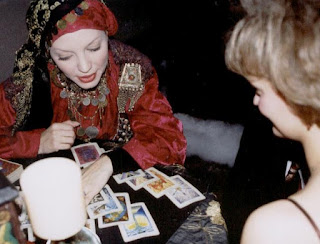 Honeysuckle is one of the Ogham cards and it means 'the path of wisdom for the Inner Self'. I walk that path since the late eighties when I discovered haiku and started writing haiku. Writing haiku has brought me happiness and pleasure. Haiku also brought me Inner Wisdom.
I walk The Path Of The Honeysuckle and I hope that my haiku are giving my readers joy, happiness and wisdom.

Thank you for sharing this. It is helpful to see how others combine meditation and haiku.

Magical in all senses and waves ... (yes, pun intended) -

I have heard of this phenomenon, but haven't had more than just moonlight to cause the silver reflections, without the life beneath the surface acting as the interface. It must be such a weird slip between veils and realms, almost like a mind's eye trick, but clearly, far more soothing and truly, a wonder. I suspect, it must be like being cradled in a blanket of stars, from all points of the earthly compass. As above, so below, in a new sense.

I particularly enjoy the moon haiku...it stands on its own very well...your description of the algae makes the image and spiritual feeling resonate even more. Janice