Just another haiku on "Summer Solstice"

Today was a nice day and I enjoyed it very much. I read some of my haiku and haiku from my fellow haiku poets. I also read a few haiku written by Basho (1644-1694). One of those haiku was the following:

departing spring
along with the people of Omi
missing it

It's about the "Summer Solstice" seen from the perspective of missing it ... Basho was on his way and maybe fell asleep and misses the Solstice of Summer. This haiku inspired me to write another one on "Summer Solstice".

In this haiku (similar to the one of Basho I think) it's not the longest day that's in my mind, but the shortest night ... the night which Basho missed I think. A night so short that you don't have to sleep at all (smiles).


This picture shows a Chinese Lantern ... it's made in Poznan (Poland) on the "Summer Solstice" or Kupala Night. Thousands of these Chinese lantern were used to set light in the shortest night.

Nice ... such festivals we don't have here, but ... we have Sunsation (*) a great festival full of music, dance, poetry and more. It's a great party and it culminates on the moment when the Summer Solstice happens.

I am so glad that I can start a new "Tackle It Tuesday" today. A few days ago Summer has started, so we have had the Summer Solstice. A new season full of joy and happiness I think. Here in The Netherlands summers are mostly wet with lots of rain, but we can have also very hot weather here. At the moment it feels like autumn here. It's cold, very rainy and stormy, but Mother Nature is in full bloom and all the trees and bushes are green. Birds singing their songs and .... well it's just a nice season.

This weeks theme is Summer Solstice. Enjoy the fun of writing haiku and please be so kind to write a comment after linking your haiku.
You can use avery haiku form you like. So it's not a sin if your haiku isn't a classical one. Enjoy writing and let flow your creativity.
To give you some inspiration you can visit my new wordpress blog Basho 2012. I have written a blog about the Summer Solstice or let the picture inspire you. 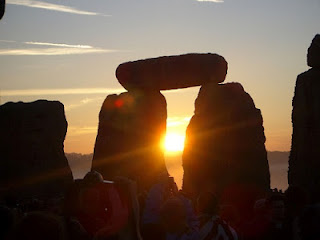 I am looking forward to your haiku on Summer Solstice.