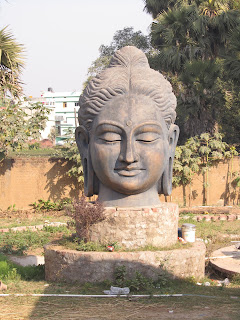 Also shared with: Haiku My Heart

I am a bit late with this new episode of "Tackle It Tuesday", but I was to busy with other things and have just now (early evening 7.45 PM) have found time to bring up a new week's theme.

Several days ago I made a walk through my neighborhood and heard the sweet, meditative sound of a wind chime. I stood their for a while and felt the relaxing influence of it's fragile sound. So ... this weeks theme is "wind chime".

Write a haiku (classical or non-classical) with wind chime as theme. Feel free to interpret the theme as you like it. It's all up to you. Just have fun, be inspired and enjoy writing your haiku.

And of course a haiku of my own. Just written right now ...

evening walk
the sound of a wind chime
deep silence

This episode of Tackle It Tuesday will stay active 'till Tuesday July 24th 11.59 PM.

Enjoy and ... please leave a comment after linking. If you have an idea for next weeks Tackle It Tuesday ... feel free to mention it to me.

See you next week. I hope that I can be on time next week. Sorry again ... for the late post of this weeks Tackle It Tuesday.