At Carpe Diem Haiku Kai (CDHK) we are on a journey through the Altai Mountains. Once the silk road ran straight through this region and our guest host at CDHK, Hamish Managua Gunn, has written a wonderful post about this silk road. You really have to read that post (as I may say so). I wasn't inspired enough to write an all new haiku in response of that post, so I dived into my archives and found a few wonderful haiku which I love to share here with you:

trembling in silence
silk tree blossoms, so fragile,
in a summer breeze

© Chèvrefeuille
I had never heard from the Silk Tree, but it is really a beautiful tree. See for yourself.


I love to share also a haiku composed by one of the four famous haiku poets, Buson, in which this silk tree is mentioned:


And to conclude this post inspired on the silk road I have two other haiku from my archives:

© Chèvrefeuille
Well .... see you next time. 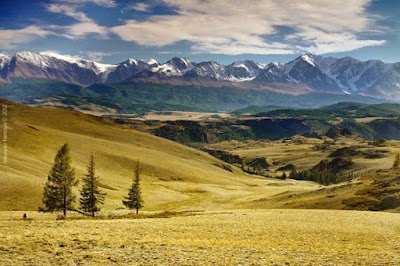 Ah! That summer rain. (A choka)

Ah! That summer rain, a choka


I recently challenged the members of my daily haiku meme Carpe Diem Haiku Kai to write a choka, a Japanese long poem. Of course I have given it a try myself. To start this first time choka ever I have used a haiku, which I composed using baransu.


the cooing of pigeons
resonates through the gray streets –
ah! that summer rain
refreshes the dried out earth
filling its scars
the perfume of earth tickles
my nostrils
after the hot summer days
I dance in the rain
naked on the top of the hills
I feel free at last
nature around me comes to life
field flowers bloom
I see their beautiful colors
the perfume of Honeysuckle


ah! that summer rain
the perfume of the moist soil
tickles my senses
I lay down, naked in her arms
surrounded by Honeysuckle


I wasn’t easy to compose this choka. I had never done this before, and I don’t know if I succeeded, but I like this choka a lot. Maybe, I have to try choka more often … or will this be my only, once in a life time, choka? 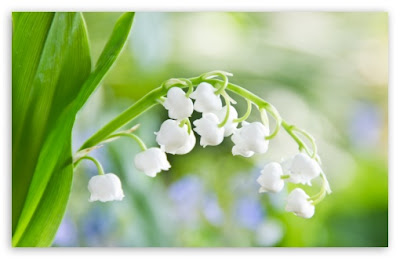 It's a new dawn ... I, Chèvrefeuille, will start to compose tanka. Tanka is another nice Japanese poetry form. It looks like waka, 5-7-5-7-7 and maybe you recognize it as part of renga or as a Tan Renga.
Recently we had an 'ask Jane' episode at Carpe Diem Haiku Kai, my daily haiku meme, about the beauty of tanka. Jane even has said that I could be a tanka poet. I am not a tanka poet, but I do like tanka. So I have decided to pick up the challenge to become a tanka poet next to being a haiku poet and ... seriously I love to try tanka.

Tanka is known as 'love-poetry', because tanka was used, like waka, as the way to give the deepest feelings of love, mostly hidden in the words and lines, to your loved one ...

Here is my first attempt ever to write tanka, as a love poem ...:

Well ... what do you think of this first attempt? 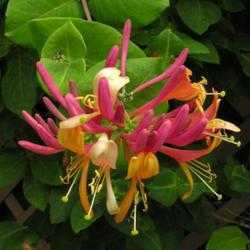 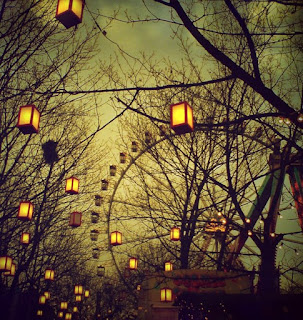 I have done this earlier on my personal weblog and this photo-challenge on MindLoveMisery's Menagerie caught my eye as I was visiting MLMM. This photo is by "5 letters" and is titled falltuer
The goal of this photo-challenge is to write a short story or a poem inspired on the photo.

Let me first take a closer look at the photo. What do I see? It's evening. I see a Ferries Wheel and at the bare branches hang paper lanterns. As I see the bare branches I think it's autumn, but it also could be winter or early spring. So it will not be easy to write a haiku ...

Here is my attempt to write a haiku towards this photo and I think it fits the photo ...

at the fairground
music resonates through the night
lanterns burn 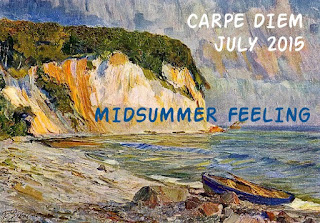 It's a while ago that posted here on my personal weblog, because of lack of time ... Today I love to share a haiku based on the "Midsummer Feeling" prompt "Gingyo or Goldfish" as is the prompt for today at Carpe Diem Haiku Kai. 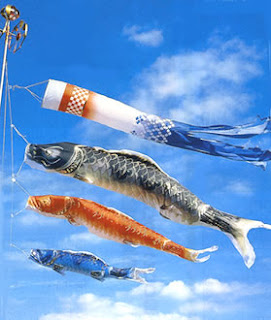 It's not a very easy prompt I think, so I will try to write an all new haiku with (hopefully) goldfish in it or else Koi or Carp ... I just have to give it a try.

next to the pond
cherry tree in bloom -
a carp jumps

This haiku is part of a haibun which I wrote several years ago. That haibun was based on Basho's famous haibun "The Narrow Road Into the Deep North" and was written in Dutch. I have tried to translate it, but that takes to much time, so maybe ... later I will translate it.

If you like to write and share haiku than feel free to visit my daily haiku-meme Carpe Diem Haiku Kai and participate.
Geplaatst door Chèvrefeuille op Friday, July 17, 2015 3 comments:

Good day my friends and followers,

This is supposed my weekend off from my duties as a host at Carpe Diem Haiku Kai (CDHK), but ... a weekend without haiku isn't possible ... and while Jen of Blog It Or Lose It is being the host for CDHK this weekend I just had to respond on our Carpe Diem Special of today.
As you maybe know every month we have a featured haiku-poet at CDHK and this month that's Santoka Taneda. Taneda had a very special way of composing his haiku and I love to try that way too. His style than is now known as 'free-style' haiku and that means ... no classical rules even no kigo (seasonword) or the 5-7-5 syllables structure.

In today's Carpe Diem Special the following haiku by Santoka Taneda is our source of inspiration:

A wonderful haiku I think and a "real" Taneda as you can see ... no 5-7-5, no kigo, no kireji ... And now it's my task to write/compose a haiku in the same sense, tone and spirit as the one by Taneda. So here is my attempt to write a "free-style" haiku like Santoka Taneda.


I think this has become a nice haiga and the haiku I composed is very much in tune with the "free-style" of Santoka Taneda. And as you can see I haven't used a kigo, kireji or 5-7-5 syllables. 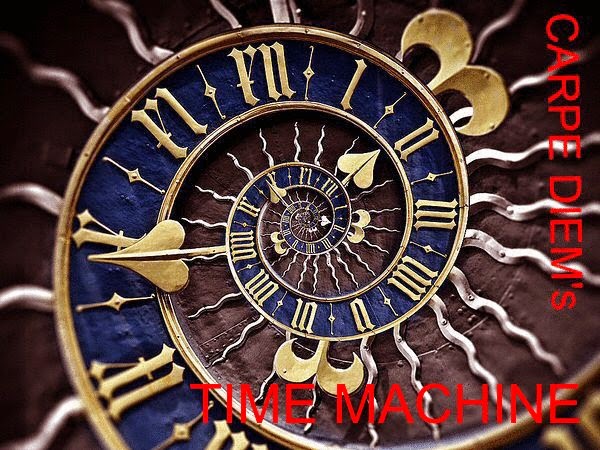 As you all know I am hosting a monthly haiku-meme Carpe Diem Haiku Kai and maybe you also know that I have created a special feature in which I re-play prompts from the rich history and archives of Carpe Diem Haiku Kai. That special feature is called "Time Machine". Today we have our 6th episode of this special feature and this time it has been created by Jen of Blog It Or Lose It. Today's "Time Machine" is about "skylark", a bird that sings gorgeous and the skylark has inspired me several times ... and it did this again ... 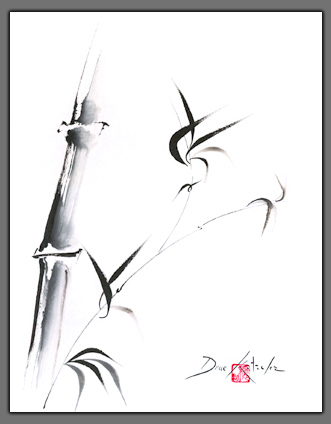 Here is my response on this "Time Machine" re-play prompt:

rustling of bamboo
the cool summer breeze -
a skylark's song

A wonderful haiku I think ... and here is a music-video with the song of the skylark.

This month at CDHK is all about haiga, picture and haiku, and today the prompt is "raindrops" and I love to share a haiga here with this prompt as theme. (Of course I will link it to Carpe Diem Haiku Kai, but that's possible tonight at 7.00 PM (CET)


A wonderful haiga, as I may say that (a little immodest) but the picture screamed to be used as a haiga and so this is what I came up with.

Another photo challenge by MindLoveMisery's Menagerie ... I just had to be part of it ...

This is a wonderful image to become inspired ... what is my inspiration distilled from this photo/image? I see the Twister, healthy and strong. I see the guy in front watching it ... he seems not to be afraid for what is coming. The river in front is still calm with just a few wrinkles. The sky so dark that there will not be any sound of birds or other animals ... I asked myself "how can I catch the essence of this image?"

I hope I did catch the essence of this image, the strongness of the twister against the fragility and silence of the birds ....

What do you think?

This is the new photo-challenge at Mindlovemisery's Menagerie and I feel proud that I will be one of their hosts on Fridays. I will host the Fairy-Tale prompt. Next Friday will be my debute at MLMM. I am a bit nervous, but I am also excited to start ... well we will see ...

Ok ... back to this Photo Challenge and to the painting of Vincent Van Gogh. Let me first tell you all a little bit more about the background of this painting.

Van Gogh painted The Mulberry Tree in October of 1889 less than a year before he would die. Like most of his art, it was done during a period of highs and lows painted during a time of great self-awareness and yet surrounded by chaos.In a letter which Vincent wrote to his brother, when he was painting The Mulberry Tree, he says: “I’ll tell you that we’re having some superb autumn days, and that I’m taking advantage of them.”
The Mulberry Tree shows a tree from the garden of the asylum. It is centered on the canvas and is growing alone from a rocky hillside. The ground is made up of short quick brushstrokes of white and pale browns. It creates a strong contrast to the dark green and brown of the tree trunk. To the right, you see more greens, indicating trees and growth in the distance. The leaves of the tree make up the majority of the painting, orange against the complementary color of the blue sky. It is that “superb autumn” that gave Vincent the bright orange leaves to paint. The ground and sky are made up of mostly straight diagonal brushstrokes, while the tree leaves are made up of curling spirals of orange and black, sometimes done with the handle of his brush.