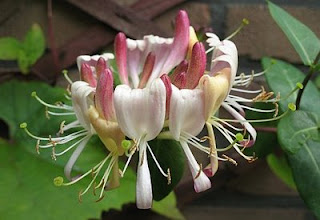 thanx for sharing about the honeysuckle and how you chose it .....I look forward to reading this series, and hopefully delving more deeply into classical haiku....I like the idea of a deeper meaning.....sometimes I think I do not think deeply enough....

Oh, this is so romantic and sweet, what a lovely memory how you met your wife :) beautiful haiku and I like this new series searching for deeper meaning, embarking on a spiritual path ... :)